This is a page of snippets from some of the major discoveries regarding present day Mars habitability that have hit the mainstream news, or at least, the mainstream science news. I will add links to the relevant parts of this encyclopedia to the stories to find out more.

The idea for this page is to show how the mainstream media have covered these stories. Also will include the press release videos. (Also useful as a way to locate topics that are not yet covered here). 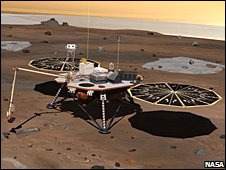 Researchers previously thought water existed largely as ice or as vapour on Mars, because of the low temperatures and atmospheric pressure.

But Nasa's Phoenix lander has shown the presence in Martian soil of perchlorate salts, which can keep water liquid at temperatures of minus 70C.

Pockets of brine might form when soil interacted with ice.

It also covers the first observations of the possible droplets on the legs of Phoenix as reported by Nilton Renno.

A fresh look at NASA data suggests that a robotic mission uncovered microbial life on Mars—more than 30 years ago.

"We just plugged all the [Viking experimental and control] data in and said, Let the cluster analysis sort it," Miller said. "What happened was, we found two clusters: One cluster constituted the two active experiments on Viking and the other cluster was the five control experiments."

To bolster their case, the team also compared the Viking data to measurements collected from confirmed biological sources on Earth—for example, temperature readings from a rat—and from purely physical, nonbiological sources.

The team concedes, however, that this finding by itself isn't enough to prove that there's life on Mars.

Still, the new findings are consistent with a previous study published by Miller, in which his team found signs of a Martian circadian rhythm in the Viking LR experiment results.

More on this, see

2014: July 8 'Is there life on Mars?': Water can and does exist on the planet says new research - IndependentEdit

Two scenarios were tested at different temperatures, one that saw just salt placed on a temperature controlled plate created to simulate the Mars surface, and one where salty soil was placed directly on ice.

In the first test no liquid formed.

In the second experiment, researchers found that placing salty soil directly on three millimetres of ice led to water droplets forming when the chamber reached -73C – the same conditions experienced during the Phoenix’s Mars landing.

'For me, the most exciting thing is that I can now understand how the droplets formed on the Phoenix leg,' said Dr Nilton Renno.

The study could also prove to scientists that Mars is able to sustain water across its surface during the summer and spring months, and could even be the first steps to finding out whether life could and does exist on the planet.

Dr Renno said: “even just a tiny droplet of water is enough for bacteria to grab hold of and survive.”

Liquid water runs down canyons and crater walls over the summer months on Mars, according to researchers who say the discovery raises the chances of being home to some form of life.

The trickles leave long, dark stains on the Martian terrain that can reach hundreds of metres downhill in the warmer months, before they dry up in the autumn as surface temperatures drop.

Images taken from the Mars orbit show cliffs, and the steep walls of valleys and craters, streaked with summertime flows that in the most active spots combine to form intricate fan-like patterns.

Scientists are unsure where the water comes from, but it may rise up from underground ice or salty aquifers, or condense out of the thin Martian atmosphere.

“There is liquid water today on the surface of Mars,” Michael Meyer, the lead scientist on Nasa’s Mars exploration programme, told the Guardian. “Because of this, we suspect that it is at least possible to have a habitable environment today.”

Nasa scientists may still be celebrating their discovery of liquid water on Mars, but they now face some serious questions about how they can investigate further and look for signs of life on the red planet.

The problem is how to find life without contaminating the planet with bugs from Earth.

Researchers at the space agency are keen for the Curiosity rover to take a closer look at the long dark streaks created by liquid water running down craters and canyon walls during the summer months on Mars.

But the rover is not sterile and risks contaminating the wet areas with earthly bugs that will have hitched a ride to the planet and may still be alive.

The vehicle has been trundling around the large Gale crater looking for evidence that Mars was habitable in the ancient past. It has so far uncovered evidence of past river networks and age-old lakes.

However, the dark, damp streaks, called recurring slope lineae (RSL), are a different prospect. Because they are wet at least part of the time, they will be designated as special regions where only sterile landers can visit. But such a restriction could hamper scientists’ hopes of looking for current life on Mars....

“There will be heated discussions in the next weeks and months about what Curiosity will be allowed to do and whether it can go anywhere near the RSLs,” said Andrew Coates of University College London’s Mullard space science laboratory. 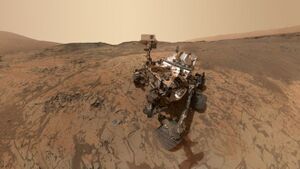 It may only be a very small part of Mars' atmosphere but methane waxes and wanes with the seasons, scientists say.

The discovery made by the Curiosity rover is important because it helps narrow the likely sources of the gas.

On Earth, those sources largely involve biological emissions - from wetlands, paddy fields, livestock and the like.

No-one can yet tie a life signature to Mars' methane, but the nature of its seasonal behaviour probably rules out some geological explanations for it. 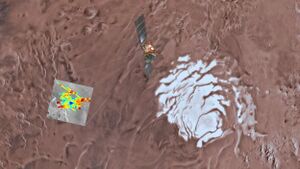 What they believe to be a lake sits under the planet's south polar ice cap, and is about 20km (12 miles) across.

Previous research found possible signs of intermittent liquid water flowing on the martian surface, but this is the first sign of a persistent body of water on the planet in the present day....

The result is exciting because scientists have long searched for signs of present-day liquid water on Mars, but these have come up empty or yielded ambiguous findings. It will also interest those studying the possibilities for life beyond Earth - though it does not yet raise the stakes in the search for biology.

Jeffery Plaut at NASA’s Jet Propulsion Lab in California, Pasadena, cautions that the find seems promising, but will need to be confirmed with further study. The radar images could also be explained by particular arrangements of carbon dioxide ice or very pure water ice, he says.

“If the result is confirmed, it would be the largest known occurrence of present-day liquid water on Mars,” says Plaut. “It clearly has implications for the history of climate and the possibility of habitats suitable for life.”

Mars is an unlikely place for life as we know it to thrive. The surface is bombarded by DNA-damaging radiation. Water has only been confirmed on the frigid landscape in the form of ice and hydrated minerals. And there's barely even a wisp of oxygen in its paltry atmosphere.

But the case for life on the red planet just got a little stronger with a new study that suggests salty waters thought to potentially exist near the surface could hold enough dissolved oxygen to support familiar forms of microbial life. In some special cases, there would even be enough of the element to harbor basic oxygen-loving animals like sponges.

from: Salty waters on Mars could host Earth-like life

The 1st results from ESA’s Trace Gas Orbiter mission at Mars have been released and – surprise – no atmospheric methane. That’s even though methane on Mars has been observed multiple times before. Where is it?

One of Mars’ most puzzling mysteries has been the discovery of methane in its atmosphere. This is exciting because, on Earth, methane comes from two primary sources – biology and geology. Mars’ methane has been detected by telescopes on Earth, orbiting spacecraft and rovers. It has been quite well established that the methane is there; the big question is where does it come from?

Bottom line: The mystery of Mars’ methane just got more puzzling. Why has TGO found no methane yet when other previous missions and observations have? Only further observations will help to answer that question and what the origin of Mars’ methane actually is. Confirmation that the methane originates from Mars itself – most likely underground – would be evidence that Mars is still alive – either geologically or biologically, or both.

A strong signal of methane was measured by the Curiosity rover on 15 June 2013.

The measurement was confirmed in data collected the next day by the Planetary Fourier Spectrometer (PFS) on board Mars Express.

If microbes still exist, they are one possible source. Methane produced by micro-organisms in the distant past could also get trapped within ice. When the ice melts, it could then release the ancient methane into the atmosphere.

But there are geological processes that can produce methane, and don't require biology. These include serpentinisation - a process of mineral alteration in the crust involving heat and water. Methane can be made as a downstream product of serpentinisation.

Scientists scrutinised the region around Gale for features where gas seepage is expected.

This process is well known on Earth to occur along tectonic faults and from natural gas fields.

"We identified tectonic faults that might extend below a region proposed to contain shallow ice. Since permafrost is an excellent seal for methane, it is possible that the ice here could trap subsurface methane and release it episodically along the faults that break through this ice," said Giuseppe Etiope from the National Institute of Geophysics and Volcanology in Rome, a co-author on one of the studies.

"Remarkably, we saw that the atmospheric simulation and geological assessment, performed independently of each other, suggested the same region of provenance of the methane."

"If we take the previous measurements at face value, and we obviously believe our own results - then there's something going on in the atmosphere between those two points in time, and it's something we don't predict.

"We expect methane to hang around in the atmosphere of Mars for hundreds of years. It's destroyed by sunlight, but it's destroyed over relatively long time-scales in terms of human observation. Whatever was there before should still be there today, even if at a diluted level." ... Some sort of chemical interaction would be one answer, but Håkan Svedhem, the European Space Agency's project scientist on TGO, says people shouldn't be downhearted about the prospects for life on the planet if methane is eventually determined not to be present.

"We've got a bit fixated by methane because on Earth we all know that more than 95% of the methane comes from biological sources. But there are abundant forms of life that do not produce methane," he told BBC News.