The ExoMars 2020 surface platform is a planned robotic Mars lander, part of the ExoMars 2020 mission by the European Space Agency and the Roscosmos State Corporation.

The plan calls for a Russian Proton-M launch vehicle to deliver the Russian-built surface platform as well as the ExoMars rover to the surface of Mars.[6] Once safely landed, the platform will deploy the rover and will start a one Earth-year mission to investigate the surface environment at the landing site.[2]

The spacecraft was scheduled to launch in 2018 and land on Mars in early 2019,[6] but due to delays in European and Russian industrial activities and deliveries of the scientific payload, it was moved to the launch window in July 2020.[4]

The science payload mass is about 45 kg and consists of:[2]

The science and communication instruments on the lander platform will be powered by solar panels and rechargeable batteries.[3] The automated voltage power system is being developed and build by ISS-Reshetnev.[3]

Russia previously evaluated the option of using a radioisotope thermoelectric generator (RTG) to power the science instruments,[7] and a radioisotope heater unit (RHU) to provide thermal control while on the frozen Martian surface.[8] 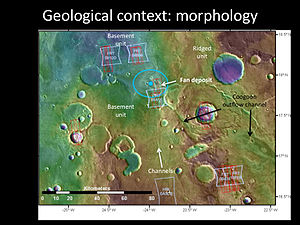 Oxia Planum, near the equator, is a proposed landing site for its smooth surface and potential to preserve biosignatures

After a review by an ESA-appointed panel, a short list of four sites was formally recommended in October 2014 for further detailed analysis:[9][10]

On 21 October 2015, Oxia Planum was chosen as the preferred landing site for the ExoMars rover assuming a 2018 launch.

Since the launch was postponed to 2020, Aram Dorsum and Mawrth Vallis will also be considered.[11][12] ESA convened further workshops to re-evaluate the three remaining options and in March 2017 selected two sites to study in detail:

The final selection is scheduled to occur approximately one year before launch.[13]

Retrieved from "https://encyclopediaofastrobiology.org/w/index.php?title=ExoMars_2020_surface_platform&oldid=1732"
Categories:
Hidden categories:
Cookies help us deliver our services. By using our services, you agree to our use of cookies.