Proposal is to remove: "Even at a depth of 2 meters beneath the surface, any microbes would likely be dormant", as this is out of date.

and to add "Some scientists such as Nilton Renno think that there is an excellent chance of discovering present day life in surface or near surface micro habitats that may form briefly for a few hours per day or year".

This is a similar statement to the one in Encyclopedia Britannica:

"Alternatively, it could be argued that the best strategy is to look for present-day life in niches, such as warm volcanic regions or the intermittent flows of what may be briny water, in the hope that life, if it ever started on Mars, would survive where conditions were hospitable."

The rest of this page is to provide citations to back up the proposed new sentence, and to explain in detail why I think the previous sentence needs to be removed.

As far as I know, these two wikipedia articles are the only sources easily found on the internet that still say this.

It all changed in 2008, with the Pheonix leg droplets observations, followed by the Phoenix isotope measurements, and the discovery of the Warm Seasonal Flows from orbital observations, and many experiments using Mars simulation chambers.

This got scientists to start to rethink things. Before 2008, the consensus was indeed as presented in this articles. So it is correct in that sense, but way out of date now. Robert Walker (talk) 11:00, 7 January 2015 (UTC)

In more detail - with the links and citations[edit source | hide]

The OR part is the sentence "Even at a depth of 2 meters beneath the surface, any microbes would likely be dormant". The reason that many scientists are now quite optimistic about the possibility of present day life on the surface of Mars is because as a result of new discoveries, they think there may be habitats on Mars where life can revive for a few hours every year.

The thing is, though the levels of cosmic radiation on the surface of Mars are far higher than for the surface of the Earth (protected by our thick atmosphere), they are comparable to the interior of the ISS.

Levels of cosmic radiation on the Mars surface

are the same as the levels within the ISS 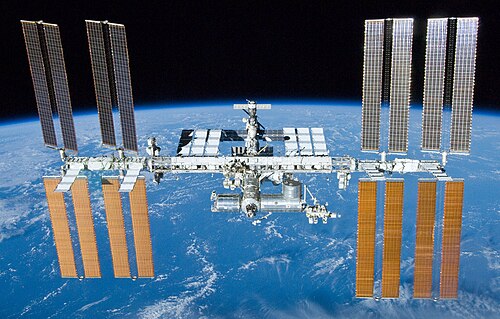 Many micro-organisms can easily survive that, even if they spend most of their time dormant, so long as they are able to revive and reproduce, or repair damage. Radioresistant microbes are able to repair damage due to the equivalent of several hundred thousand years of Mars surface cosmic radiation within a few hours of revival from dormancy (they don't need to reproduce to do this, they repair their own DNA). For details: Deinococcus_radiodurans#Ionizing-radiation_resistance

Here is a citation to back this up, that microbes can survive cosmic radiation on Mars if they are able to revive:

"Due to the lack of a magnetic field and the low shielding of the Martian atmosphere (the Martian overhead airmass is 16 g cm-2 instead of the terrestrial 1000 g cm-2) the doses of ionizing radiation at the surface of Mars reach values about 100 times higher than those on the Earth.

"However, since a great variety of microbes tolerate this type of radiation at similar or even greater doses than those found on Mars, ionizing radiation cannot be considered a limiting factor for microbial life on Mars and thus here we will limit our study to solar UV shielding and VIS radiation pentration."

Recently several notable scientists have put forward the view that there may be life on present day Mars.

For instance, at the end of this video, Nilton Remmo says very clearly

"Based on the results of our experiment, we expect this soft ice that can liquify perhaps a few days per year, perhaps a few hours a day, almost anywhere on Mars. --- This is a small amount of liquid water. But for a bacteria, that would be a huge swimming pool ... So, a small amount of water is enough for you to be able to create conditions for Mars to be habitable today. And we believe this is possible in the shallow subsurface, and even the surface of the Mars polar region for a few hours per day during the spring.'"
(transcript from 2 minutes into the video onwards)

He led the research team and is a professor of atmospheric, oceanic and space sciences at Michigan University. He is also project scientist for Curiosity in charge of the REMS weather station on Mars, was also a scientist on the Phoenix lander team, and author of Water and Brines on Mars: Current Evidence and Implications for MSL. Few know more than him about surface conditions on Mars. And note that the REMS weather station is responsible for the most up to date readings of cosmic radiation on Mars.

See his list of Honors and Accomplishments on the University of Michigan page about Nilton Renno.

His statement was widely reported at the time, e.g.:

In the academic paper about this research he writes:

"The results of our experiments suggest that the spheroids observed on a strut of the Phoenix lander formed on water ice splashed during landing [Smith et al., 2009; Rennó et al., 2009]. They also support the hypothesis that “soft ice” found in one of the trenches dug by Phoenix was likely frozen brine that had been formed previously by perchlorates on icy soil. Finally, our results indicate that liquid water could form on the surface during the spring where snow has been deposited on saline soils [Martínez et al., 2012; Möhlmann, 2011]. 'These results have important implications for the understanding of the habitability of Mars because liquid water is essential for life as we know it, and halophilic terrestrial bacteria can thrive in brines'" - see Experimental evidence for the formation of liquid saline water on Mars

Can't be doubted, I think, that a citation of his views passes the notability criteria for Wikipedia sources.

For other quotes, see User:Robertinventor/possibility_of_Mars_having_enough_water_to_support_life#Some_useful_quotes

"Despite this setback, the main driver of the Mars exploration program is still the search for life. Because liquid water is so essential for life, the initial focus has been on the search for evidence of warm conditions that would enable the persistence of liquid water. The evidence for such conditions at least on early Mars is now compelling, and there is some evidence that liquid water sometimes flows on the surface in a few places. The exploration thrust will likely shift to search for more-direct evidence such as organic remains and isotopic signatures. It could be argued that the best strategy is to look for fossil remains from the early period in Mars’s history when conditions were more Earth-like. But the Martian meteorite debate and disagreements about early terrestrial life point to the difficulty of finding compelling evidence of microbial fossil life. Alternatively, it could be argued that the best strategy is to look for present-day life in niches, such as warm volcanic regions or the intermittent flows of what may be briny water, in the hope that life, if it ever started on Mars, would survive where conditions were hospitable."

(from The question of life on Mars - Encyclopedia Britannica ).

And there was a conference on The Present-Day Habitability of Mars 2013. This discusses many details of the possibilities for life on present day Mars including possible REDOX pathwasy it could exploit.

In the course of the conference some of the speakers were upbeat and optimistic about finding present day life on Mars in these surface and near surface habitats.

Yes, as current version of Water_on_Mars#Habitability_assessment says, cosmic radiation is listed as one of 17 habitability factors for present day life on Mars.

But if you follow up the citations given in this section, the first one says "Solar particle events and galactic cosmic rays were considered external factors that occur infrequently or at low dosage, respectively".

The other one just lists it under "Some factors that may affect the survival and reproduction of Earth microbes on Mars".

Other scientists have also said the same thing - it is easy to find other citations, I just chose Nilton Renno as the most notable and obviously competent to make such an assessment.

Even Robert Zubrin (who you might expect to be most skeptical about it) now says e.g. in a SpaceShow interview that he think there is a reasonable chance of finding present day surface life on Mars.

None of these scientists ever suggest that it is impossible because of cosmic radiation.

Indeed it is a rare paper or talk on this subject that mentions cosmic radiation at all. The authors focus on such matters as UV radiation, the near vacuum conditions, the low temperatures, and high levels of salts as the main issues present day surface life on Mars would have to contend with in these proposed habitats.

Statement that all life is likely dormant is WP:POV or WP:OR[edit source | hide]

The statement that all life in the top two meters is likely dormant is a reasonable summary of our state of knowledge about six years ago, before the Phoenix discoveries in 2008 and onwards.

However - to continue to affirm this - post Phoenix and all the following research of the last six years - this is WP:OR - or WP:POV - with many scientists saying that they think there are chances of liquid water microhabitats on Mars.

Indeed there is much research underway to find out more about these possible habitats, and to investigate possible biochemical pathways that life on Mars could use to exploit them. Many papers on this. See for instance the contributions to the three day conference The Present-Day Habitability of Mars 2013 with 37 speakers presenting papers and video talks.

Wikipedia used to have a reasonably adequate treatment of this subject area, in the section Possibility of Mars having enough water to support life, which was in this article up to 2011.

However, after BI deleted that section, there is now almost nothing on the topic in wikipedia, as far as I know. And it is a rapidly changing field with many new developments each year and many academic papers published on the topic - hard to keep up with.

I suggest that it would be good to reintroduce this material from 2011 - and update it to take account of more recent research - either as part of an existing article, or as a separate article on its own, say titled Present Day Habitability of Mars.