Doom Mons, one of the most reliably identified cryovolcanoes on Saturn's moon Titan[1]

A cryovolcano (sometimes informally called an ice volcano) is a type of volcano that erupts volatiles such as water, ammonia or methane, instead of molten rock.[2] Collectively referred to as cryomagma, cryolava or ice-volcanic melt,[2] these substances are usually liquids and can form plumes, but can also be in vapour form. After eruption, cryomagma is expected to condense to a solid form when exposed to the very low surrounding temperature. Cryovolcanoes may potentially form on icy moons and other objects with abundant water past the Solar System's snow line (such as Pluto[3]). A number of features have been identified as possible cryovolcanoes on Pluto, Titan and Ceres. In addition, although they are not known to form volcanoes, ice geysers have been observed on Enceladus and potentially Triton.

One potential energy source on some solar system bodies for melting ices and producing cryovolcanoes is tidal friction. It has also been suggested[by whom?] that translucent deposits of frozen materials could create a subsurface greenhouse effect that would accumulate the required heat.

Signs of past warming of the Kuiper belt object Quaoar[4] have led scientists to speculate that it exhibited cryovolcanism in the past. Radioactive decay could provide the energy necessary for such activity, as cryovolcanoes can emit water mixed with ammonia, which would melt at 180 K (−95 °C) and create an extremely cold liquid that would flow out of the volcano.

Plumes of Enceladus, feeding Saturn's E Ring, seem to arise from the "Tiger Stripes" near the south pole.

Indirect evidence of cryovolcanic activity was later observed on several other icy moons of the Solar System, including Europa, Titan, Ganymede, and Miranda. Cassini has observed several features thought to be cryovolcanoes on Titan, notably Doom Mons with adjacent Sotra Patera, a feature regarded as "the very best evidence, by far, for volcanic topography anywhere documented on an icy satellite."[6] Cryovolcanism is one process hypothesized to be a significant source of the methane found in Titan's atmosphere.[7]

In 2007, observations by the Gemini Observatory showing patches of ammonia hydrates and water crystals on the surface of Pluto's moon Charon suggested the presence of active cryovolcanoes or cryogeysers.[8][9] Subsequent observations by New Horizons in 2015 found that Charon has a youthful surface, supporting this idea.[10] Pluto itself has two features that have been identified as possible cryovolcanoes, being mountains with indented peaks.[11]

In 2015, two distinct bright spots inside a crater of the dwarf planet Ceres were imaged by the Dawn spacecraft, leading to speculation about a possible cryovolcanic origin.[12]

In September 2016, NASA JPL and NASA Goddard scientists released findings that large Ahuna Dome on Ceres is a "volcanic dome unlike any seen elsewhere in the solar system. [The large] mountain is likely volcanic in nature. Specifically, it would be a cryovolcano -- a volcano that erupts a liquid made of volatiles such as water, instead of silicates. ... the only known example of a cryovolcano that potentially formed from a salty mud mix, and that formed in the geologically recent past."[13] In addition, at least some of Ceres' well known bright spots (notably including the ones in Occator crater) are likely also cryovolcanic in origin.[14] A study published in March 2017 suggests that Occator's most recent large eruption occurred about 4 million years ago and thus that Ceres may still be active.[15] 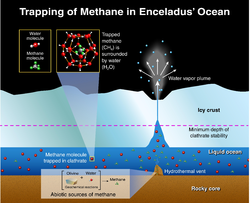 Possible origins of methane found in plumes through its subsurface ocean 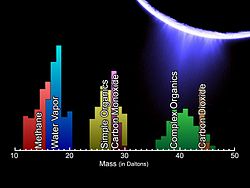 Chemical composition of the plumes of Enceladus

Retrieved from "https://encyclopediaofastrobiology.org/w/index.php?title=Cryovolcano&oldid=3242"
Categories:
Hidden category:
Cookies help us deliver our services. By using our services, you agree to our use of cookies.