Joshua Lederberg, ForMemRS[1] (May 23, 1925 – February 2, 2008)[2] was an American molecular biologist known for his work in microbial genetics, artificial intelligence, and the United States space program. He was 33 years old when he won the 1958 Nobel Prize in Physiology or Medicine for discovering that bacteria can mate and exchange genes (bacterial conjugation).[3] He shared the prize with Edward Tatum and George Beadle, who won for their work with genetics.

In addition to his contributions to biology, Lederberg did extensive research in artificial intelligence. This included work in the NASA experimental programs seeking life on Mars and the chemistry expert system Dendral.

Lederberg was born in Montclair, New Jersey, to a Jewish family, son of Esther Goldenbaum Schulman Lederberg and Rabbi Zvi Hirsch Lederberg, in 1925, and moved to Washington Heights, Manhattan as an infant.[4] He had two younger brothers. Lederberg graduated from Stuyvesant High School in New York City at the age of 15 in 1941.[5] After graduation, he was allowed lab space as part of the American Institute Science Laboratory, a forerunner of the Westinghouse Science Talent Search. He enrolled in Columbia University in 1941, majoring in zoology. Under the mentorship of Francis J. Ryan, he conducted biochemical and genetic studies on the bread mold Neurospora crassa. Intending to receive his MD and fulfill his military service obligations, Lederberg worked as a hospital corpsman during 1943 in the clinical pathology laboratory at St. Albans Naval Hospital, where he examined sailors' blood and stool samples for malaria. He went on to receive his undergraduate degree in 1944.

Joshua Lederberg began medical studies at Columbia's College of Physicians and Surgeons while continuing to perform experiments. Inspired by Oswald Avery's discovery of the importance of DNA, Lederberg began to investigate his hypothesis that, contrary to prevailing opinion, bacteria did not simply pass down exact copies of genetic information, making all cells in a lineage essentially clones. After making little progress at Columbia, Lederberg wrote to Edward Tatum, Ryan's post-doctoral mentor, proposing a collaboration. In 1946 and 1947, Lederberg took a leave of absence to study under the mentorship of Tatum at Yale University. Lederberg and Tatum showed that the bacterium Escherichia coli entered a sexual phase during which it could share genetic information through bacterial conjugation.[6][7] With this discovery and some mapping of the E. coli chromosome, Lederberg was able to receive his Ph.D. from Yale University in 1947.[8] Joshua married Esther Miriam Zimmer (herself a student of Edward Tatum) on December 13, 1946.

Instead of returning to Columbia to finish his medical degree, Lederberg chose to accept an offer of an assistant professorship in genetics at the University of Wisconsin–Madison. His wife Esther Lederberg went with him to Wisconsin. She received her doctorate there in 1950. 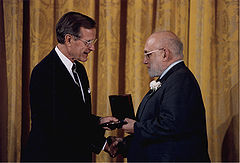 In 1958, Joshua Lederberg received the Nobel Prize and moved to Stanford University, where he was the founder and chairman of the Department of Genetics. He collaborated with Frank Macfarlane Burnet to study viral antibodies. With the launching of Sputnik in 1957, Lederberg became concerned about the biological impact of space exploration. In a letter to the National Academies of Sciences, he outlined his concerns that extraterrestrial microbes might gain entry to Earth onboard spacecraft, causing catastrophic diseases. He also argued that, conversely, microbial contamination of manmade satellites and probes may obscure the search for extraterrestrial life. He advised quarantine for returning astronauts and equipment and sterilization of equipment prior to launch. Teaming up with Carl Sagan, his public advocacy for what he termed exobiology helped expand the role of biology in NASA.[13]

In the 1960s, he collaborated with Edward Feigenbaum in Stanford's computer science department to develop DENDRAL.

Throughout his career, Lederberg was active as a scientific advisor to the U.S. government. Starting in 1950, he was a member of various panels of the Presidential Science Advisory Committee. In 1979, he became a member of the U.S. Defense Science Board and the chairman of President Jimmy Carter's President's Cancer Panel. In 1989, he received National Medal of Science for his contributions to the scientific world. In 1994, he headed the Department of Defense's Task Force on Persian Gulf War Health Effects, which investigated Gulf War Syndrome. 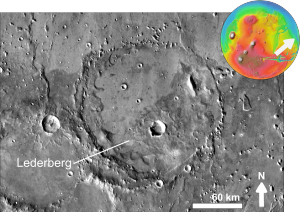 Lederberg married fellow scientist Esther Miriam Zimmer in 1946; they divorced in 1966. He married psychiatrist Marguerite Stein Kirsch in 1968. He was survived by Marguerite, their daughter, Anne Lederberg, and his stepson, David Kirsch.

Retrieved from "https://encyclopediaofastrobiology.org/w/index.php?title=Joshua_Lederberg&oldid=7993"
Categories:
Hidden categories:
Cookies help us deliver our services. By using our services, you agree to our use of cookies.