Pleopsidium chlorophanum (gold cobblestone lichen)[1][2]:27 is a distinctively colored, bright lemon-yellow to chartreuse[3] crustose lichen, which favors dry arctic or alpine sandstone cliffs and boulders. It's a rare alpine lichen in Europe. It is in the Pleopsidium genus of the Acarosporaceae family.

This lichen is one of the few species able to survive at high altitudes in Antarctica, at altitudes of up to 2000 meters. It is able to cope with high UV, low temperatures and dryness. In its Antarctic habitat, it can be found on the surface, but it's mainly found in cracks, where just a small amount of scattered light reaches it. This is probably adaptive behaviour to protect it from UV light and desiccation. It remains metabolically active in temperatures down to -20 C, and can absorb small amounts of liquid water in an environment with ice and snow. 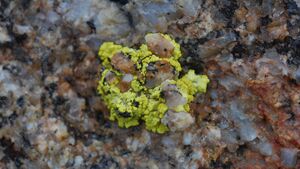 Pleopsidium chlorophanum on granite, collected at an altitude of 1492 m above sea level at "Black Ridge" in North Victoria Land, Antarctica. This photograph shows its semi-endolithic growth in Antarctic conditions. You can see that it has fragmented the granite, and that pieces of the granite are partly covering it, possibly helping to protect from UV light. Photograph credit DLR

It is of especial interest for astrobiology since this is one of the most Mars like environments on the Earth. In a 34-day experiment when placed in a Mars simulation chamber, it continued to photosynthesize, and it adapted to Mars conditions and even adapted physiologically by increasing its photosynthetic activity, and producing new growth.[4]

It is similar to Acarospora schleicheri, which grows on soil (terricolous lichen) and rarely on rock, and to Pleopsidium flavum.[5]:186 that grows in high elevations (montane to alpine) on vertical or overhanging hard felsic rock (e.g. granite) in western North America.[5]:186

Lua error in package.lua at line 80: module 'Module:TaxonItalics' not found.