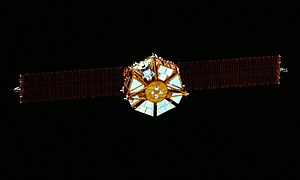 The Space Flyer Unit (宇宙実験・観測フリーフライヤ, Uchū Jikken-Kansoku Free Flyer) was a spacecraft which was launched by Japan on Mar. 18, 1995.[2]

SFU exhibited in the National Museum of Nature and Science, Tokyo.

The Space Flyer Unit was launched from Tanegashima Space Center from a H-II vehicle.[2] It was carrying testing materials and research data that held value to NASA. They retrieved the data from the Space Flyer Unit by Space Shuttle Endeavour on Jan. 20th, 1996 (which was 10 months after the Space Flyer Unit was launched.[2] The idea behind the implementation of the SFU was a joint effort by multiple major corporations. The ones that were involved with the launch were Institute of Space and Astronautical Science, the National Space Development Agency, and Ministry of International Trade and Industry.[3]

After the shuttle returns the SFU from space, the SFU is transported to Japan and refurbished for the next flight.[4]

The original purposes behind the SFU were to[5]

A variety of systems that were operational within the SFU had never been implemented before. Equipment on board supported an infrared telescope, two-dimensional solar array, high voltage solar array, space plasma diagnosis, electric propulsion, material experimentation, gas dynamics, gradient heating chemicals, isothermal heating furnace and more.[6] The core system that was built into the SFU contained an octagonal aluminum truss. Inside of that were eight boxes of trapezoidal shape.[6] The SFU was connected directly to the Kagoshima Space Center.[7]

There were a number of various types of experiments that were performed on board the SFU during its launch life cycle. Those experiments, and light data related to them are listed below.