Many dark streaks form seasonally on Mars. Most of these are thought to be due to dry ice and wind effects. This image shows an example, probably the result of avalanche slides and not thought to have anything to do with water: 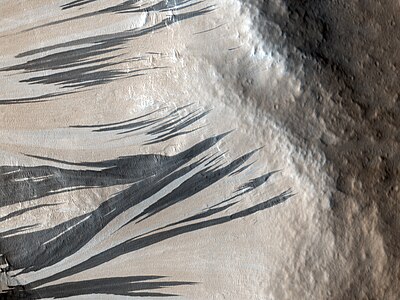 However a few of the streaks form in conditions that rule out all the usual mechanisms. These are the Warm Seasonal Flows, also known as Recurrent Slope Lineae.[1]

The leading hypotheses for these is that they are correlated in some way with the seasonal presence of liquid water - probably salty brines.

The dark streaks resemble damp patches, but spectral measurements from orbit don't detect water. One suggestion is that the water re-arranges the sand grains so causing a darkening, for instance by removing fine dust from the surface. The images were all taken in the afternoons, so it is also possible that the water flows in the early morning and that this water has evaporated when the Mars Reconnaissance Orbiter is able to take the images and do spectroscopic imaging. The streaks are also much narrower than the resolution of the spectroscopic imaging from orbit, so water could be missed for that reason also.

Slopes with the streaks are enriched in the more oxidized ferrous and ferric oxides compared with other similar slopes without the streaks, which could be the result of water. The strength of the spectral signatures of the ferrous and ferric oxides also varies according to the season like the streaks themselves. The leading hypothesis for these streaks is that they are caused by water, kept liquid by salts which reduce the freezing point of the water.[2]

Most of them occur at higher latitudes, but in 2013, a dozen new RSL's were also discovered in the Valles Marineres area, surprisingly close to the equator. [3]

"The MRO has turned up 12 new sites — each of which has hundreds or thousands of streaks — within 25 degrees of the equator. The temperatures there are relatively warm throughout the year, says McEwen, and without a mechanism for replenishment, any subsurface ice would probably already have sublimated."

"He says that this suggests that water may come from groundwater deep in the crust, which could have implications for Martian life: "The subsurface is probably the best place to find present-day life if it exists at all because it is protected from the radiation and temperature extremes," he says. "Maybe some of that water occasionally leaks out onto the surface, where we could see evidence for that subsurface life." [4] 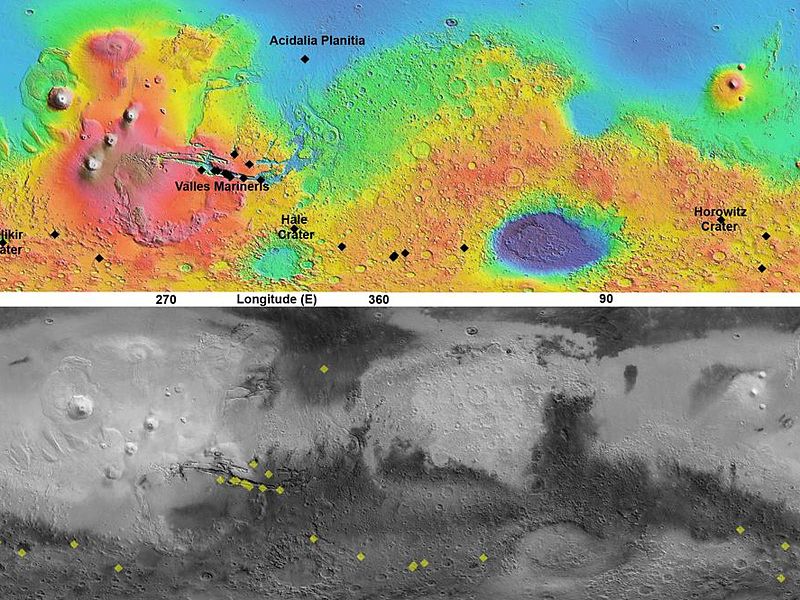 "We observe the lineae to be most active in seasons when the slopes often face the sun. Expected peak temperatures suggest that activity may not depend solely on temperature. Although the origin of the recurring slope lineae remains an open question, our observations are consistent with intermittent flow of briny water. Such an origin suggests surprisingly abundant liquid water in some near-surface equatorial regions of Mars".[3]

They were first reported in the paper by McEwan in Science, August 5, 2011.[5] They were already suspected as involving flowing brines back then, as all the other models available involved liquid water in some form. Finally proven pretty much conclusively to involve liquid water in some form, possibly habitable if temperatures and salinity are right - after detection of hydrated salts that change their hydration state rapidly, reported in a paper published on 28 September 2015 along with a press conference [1].[6][7][8][9] The brines were not detected directly, because the resolution of the spectrometer isn't high enough for this, and also the brines probably flow in the morning. MRO is in a slowly precessing sun-synchronous orbit inclined at 93 degrees (orbital period 1 hr 52 minutes). Each time it crosses the Mars equator on the sunny side, South to North, the time is 3:00 pm, in the local solar time on the surface, all year round. This is the worst time of day to spot brines from orbit.[10]

Although these features are now confirmed to involve liquid water in some form, the water could be either too cold or too salty for life. At present they are treated as potentially habitable, as "Uncertain Regions, to be treated as Special Regions".

The "Special Regions" assessment says of them:[11]

Retrieved from "https://encyclopediaofastrobiology.org/w/index.php?title=Warm_Seasonal_flows_on_Mars_(Recurrent_Slope_Lineae)&oldid=10026"
Cookies help us deliver our services. By using our services, you agree to our use of cookies.