Steven J. Dick (born October 24, 1949, Evansville, Indiana) is an American astronomer, author, and historian of science most noted for his work in the field of astrobiology. Dick served as the Chief Historian for the National Aeronautics and Space Administration from 2003 to 2009[1] and as the Baruch S. Blumberg NASA/Library of Congress Chair in Astrobiology from 2013 to 2014.[2] Before that, he was an astronomer and historian of science at the United States Naval Observatory in Washington, DC, from 1979 to 2003. 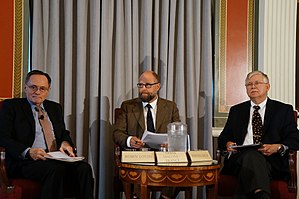 Steven J. Dick received a Bachelor of Science in astrophysics from Indiana University in 1971. In 1977, he earned a Master of Arts and a Ph.D. in the history and philosophy of science. For 24 years, Dick worked as an astronomer and historian of science for United States Naval Observatory in Washington, D.C., including three years at the Naval Observatory's Southern Hemisphere station in New Zealand. There he was part of a team using transit telescopes and astrographs to chart the northern and southern skies. During this time, he also wrote the history of the Observatory, the first national observatory of the United States, published as Sky and Ocean Joined: The U. S. Naval Observatory, 1830-2000.

In 2003, he was named the Chief Historian for the National Aeronautics and Space Administration (NASA).[3] During his years at NASA, Dick wrote on the importance of exploration to society,[4] commissioned numerous histories of spaceflight, and edited several volumes on the societal impact of space flight and on the occasion of the 50th anniversaries of NASA and the space age.[5] Dick also received the NASA Group Achievement Award "for initiating the new NASA multidisciplinary program in astrobiology, including the definition of the field of astrobiology, the formulation and initial establishment of the NASA Astrobiology Institute, and the development of a Roadmap to guide future NASA investments in astrobiology."[6]

Dick's published work in the field of astrobiology includes Plurality of Worlds: The Origins of the Extraterrestrial Life Debate from Democritus to Kant (Cambridge University Press, 1982); The Biological Universe: The Twentieth Century Extraterrestrial Life Debate and the Limits of Science (Cambridge University Press, 1996); Life on Other Worlds: The 20th Century Extraterrestrial Life Debate (1998), and, with James Strick, The Living Universe: NASA and the Development of Astrobiology (2005). These works are among the first scholarly volumes to take the history of the extraterrestrial life debate seriously. They argue that since the ancient Greeks, extraterrestrial life has been a theme tied to scientific cosmologies, including the ancient atomist, Copernican, Cartesian, and Newtonian worldviews. Dick argues that from an epistemological point of view the methods of astrobiology in the twentieth century are as empirical as in any historical science such as astronomy or geology. Dick has also surveyed the field of astrobiology in "Critical Issues in the History, Philosophy, and Sociology of Astrobiology" (Astrobiology, Vol. 12, No. 10, 2012). On December 4, 2013, while holding the NASA/Library of Congress Chair in Astrobiology, Dick testified on astrobiology before the U.S. House of Representatives Committee on Science, Space, and Technology, arguing that SETI funding should be restored and integrated with the NASA astrobiology program.[7]

Aside from his work in astrobiology, Dick is known for advancing the ideas of cosmotheology and the postbiological universe. Cosmotheology holds that theology should be based on what we know about the universe, namely that we are not in a central physical position, and possibly not in a central position biologically.[8] The idea of a postbiological universe emerges from taking seriously cultural evolution as an integral part of cosmic evolution, and application of the Intelligence Principle. The latter states that the improvement of intelligence is the central driving force of cultural evolution, and that to the extent a civilization can improve its intelligence, it will improve its intelligence. Assuming the "strong artificial intelligence" goal is possible, most intelligent life existing beyond the Earth will have evolved to postbiological machine intelligence, with implications for the Search for Extraterrestrial Intelligence (SETI).[9]

In his book Discovery and Classification in Astronomy, Dick argues that scientific discovery is an extended process involving the efforts of many individuals across multiple stages of detection, interpretation, and understanding. This finding, which redefines the nature of scientific discovery, is contrary to common expectations.[10] The book also defines 82 classes of astronomical objects, and orders them into "Astronomy's Three Kingdoms," astronomy's first comprehensive classification system.

Dick served as Chairman of the Historical Astronomy Division of the American Astronomical Society (1993–1994), as President of the History of Astronomy Commission of the International Astronomical Union (1997-2000) and as President of the Philosophical Society of Washington.[11][12][13] He is on the editorial board for the Journal for the History of Astronomy and the Journal of Astronomical History and Heritage. From 2011-2012 he held the Charles A. Lindbergh Chair in Aerospace History at the National Air & Space Museum. In 2013 Dick was named the Baruch S. Blumberg NASA/Library of Congress Chair in Astrobiology.[14]

Dick is the recipient of the NASA Exceptional Service Medal and the Navy Meritorious Civilian Service Medal. In 2006, Dick received the LeRoy E. Doggett Prize from the American Astronomical Society for a career that has significantly influenced the field of the history of astronomy.[15] Also in 2006, Dick was selected to deliver the first Billingham Cutting Edge Lecture,[16] at the International Astronautical Congress in Valencia, Spain. In 2009, minor planet 6544 Stevendick was named in his honor.[17] In 2012, he was elected a Fellow of the American Association for the Advancement of Science.

Retrieved from "https://encyclopediaofastrobiology.org/w/index.php?title=Steven_J._Dick&oldid=7961"
Categories:
Hidden categories:
Cookies help us deliver our services. By using our services, you agree to our use of cookies.