The NASA Astrobiology Institute (NAI) was established in 1998 by the National Aeronautics and Space Administration (NASA)[1] "to develop the field of astrobiology and provide a scientific framework for flight missions."[2]

The NAI is a virtual,[3] distributed organization that integrates astrobiology research and training programs in concert with the national and international science communities.[4]

Although NASA had explored the idea of forming an astrobiology institute in the past, when the Viking biological experiments returned negative results for life on Mars, the public lost interest and federal funds for exobiology dried up. In 1996, the announcement of possible traces of ancient life in the Allan Hills 84001 meteorite from Mars led to new interest in the subject. At the same time, NASA developed the Origins Program, broadening its reach from exobiology to astrobiology, the study of the origin, evolution, distribution, and future of life in the universe.[1]

In 1998, $9 million was set aside to fund the NASA Astrobiology Institute (NAI), an interdisciplinary research effort using the expertise of different scientific research institutions and universities from across the country, centrally linked to Ames Research Center in Mountain View, California. Gerald Soffen former Project Scientist with the Viking program, helped coordinate the new institute.[1] In May,[4] NASA selected eleven science teams, each with a Principal Investigator (PI).[5] NAI was established in July with Scott Hubbard as interim Director.[4] Nobel laureate Baruch S. Blumberg was appointed the first Director of the institute, and served from May 15, 1999 – October 14, 2002.[6]

On 2 December 2010 the Institute announced that one of its funded projects at the US Geological Survey, had discovered the first microorganism able to incorporate arsenic in its DNA instead of phosphate.[7] The GFAJ-1 bacterium was found by team researchers at Mono Lake in California, but other researchers questioned and debunked the findings.[8][9][10][11] 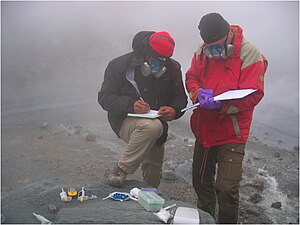 As of 2018, the NAI has 10 teams including about 600 researchers distributed across ~100 institutions. It also has 13 international partner organizations. Some past and present teams are:[12][13]

NAI has partnership program with other international astrobiology organizations to provide collaborative opportunities for its researchers within the global science community.[14]

Selected, significant topics of interdisciplinary research by NAI as of 2008:[4]