CAESAR (Comet Astrobiology Exploration Sample Return) is a proposed sample-return mission to comet 67P/Churyumov–Gerasimenko. The mission was proposed in 2017 to NASA's New Frontiers program mission 4, and on 20 December 2017 it was one of two finalists selected for further concept development.

If selected in July 2019, it may launch between 2024 and 2025, with a capsule delivering a sample back to Earth in 2038. The Principal Investigator is Steve Squyres of Cornell University in Ithaca, New York. CAESAR would be managed by NASA's Goddard Space Flight Center in Greenbelt, Maryland. The spacecraft would be built by various collaborating entities: NASA's Goddard Space Flight Center; Northrop Grumman in Dulles, Virginia; JAXA, Japan's space agency; Honeybee Robotics in Pasadena, California; Malin Space Science Systems in San Diego, California; and Kinetx Aerospace in Simi Valley, California. Curation of the returned sample would take place at NASA's Johnson Space Center in Houston, Texas.

The CAESAR team chose comet 67P over other cometary targets in part because the data collected by the Rosetta mission, which studied the comet from 2014 to 2016, allows the spacecraft to be designed to the conditions there. This in turn will increase the mission's chance of success.[3] The Rosetta mission also provides a vast scientific context for this mission's sample-return analysis. 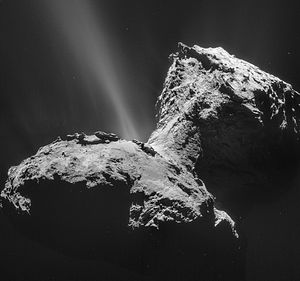 Comet 67P/Churyumov–Gerasimenko as seen by Rosetta in 2015; CAESAR's proposed target

The two New Frontiers program Mission 4 finalists, announced on 20 December 2017, are Dragonfly to Titan, and CAESAR.[4] Comet 67P was previously explored by the European Space Agency's Rosetta probe and its lander Philae during 2014-2016 to determine its origin and history. Squyres explained that knowing the existing conditions at the comet, it allows them to design systems that will dramatically improve the chances for success.[3]

The CAESAR and Dragonfly missions will receive US$4 million funding each through the end of 2018 to further develop and mature their concepts.[3] NASA plans to select one of these proposals in July 2019 to build and launch in 2024 or 2025.[4][3]

A comet sample-return mission was one of the goals in a list of options for a New Frontiers mission in both the 2003 and 2011 Planetary Science Decadal Survey, which were guiding surveys among those in the scientific community of what and where NASA should prioritize.[5] Another comet mission proposal, Comet Hopper, was one of three Discovery Program finalists that received US$3 million in May 2011 to develop a detailed concept study, however it was not selected.[6] NASA has launched several missions to comets in the late 1990s and 2000s; these missions include Deep Space 1 (launched 1998), Stardust (launched 1999), CONTOUR (launched 2002 but failed after launch), and Deep Impact (launched 2005), as well as some participation on the Rosetta mission.

Some researchers have speculated that Earth may have been seeded with organic compounds early in its development by tholin-rich comets, providing the raw material necessary for life to emerge.[7][8] Tholins were detected by the Rosetta mission to comet 67P/Churyumov–Gerasimenko.[9][10]

The spacecraft would not land on the comet, but would momentarily contact the surface with its TAG (Touch-And-Go) robotic arm, as will be done by OSIRIS-REx on an asteroid, including raising the solar arrays into a Y-shaped configuration to minimize the chance of dust accumulation during contact and provide more ground clearance.[1] The sampler mechanism on the arm would produce a burst of nitrogen gas to blow regolith particles in to the sampler head located at the end of the arm. CAESAR would collect a total of between 100 and 800 g (3.5 and 28.2 oz) of regolith from the comet. The maximum pebble size would be 4.5 cm (1.8 in).[1]

The system would separate the volatiles from the solid substances into separate containers and preserve the samples cold for the return trip.[11] The spacecraft would head back to Earth and drop off the sample in a capsule, which would re-enter Earth's atmosphere and parachute down to the surface in 2038.[3] The sample-return capsule (SRC) would be provided by JAXA and its design is based upon the SRC flown on the Hayabusa and Hayabusa2 spacecraft.[2] Most of the sample (≥75%) would be preserved for analysis by future generations of scientists.[11] 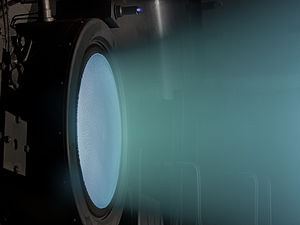 NASA's Evolutionary Xenon Thruster (NEXT) operation in a vacuum chamber

The propulsion system on CAESAR would be NASA's NEXT ion thruster,[1][2] a type of solar electric propulsion.

Retrieved from "https://encyclopediaofastrobiology.org/w/index.php?title=CAESAR_(spacecraft)&oldid=1702"
Categories:
Hidden categories:
Cookies help us deliver our services. By using our services, you agree to our use of cookies.