For the origin of life, see Abiogenesis, Astrobiology, and Panspermia.
This article is about things that were once living. For other uses, see Lifeform (disambiguation). For longest lifespans, see List of longest-living organisms. 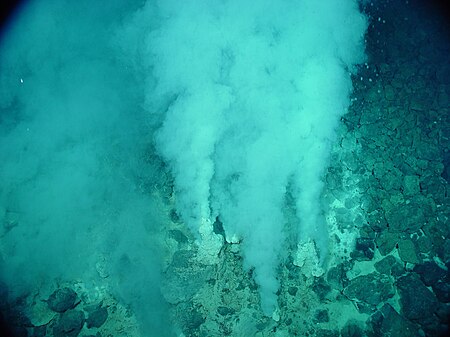 Evidence of possibly the oldest forms of life on Earth have been found in hydrothermal vent precipitates.[1][2]

Currently, Earth remains the only place in the universe known to harbor life forms.[11][12]

Archaea, prokaroytic microbes, were first found in extreme environments, such as hydrothermal vents.

More than 99% of all species of life forms, amounting to over five billion species,[13] that ever lived on Earth are estimated to be extinct.[14][15]

Some estimates on the number of Earth's current species of life forms range from 10 million to 14 million,[16] of which about 1.2 million have been documented and over 86 percent have not yet been described.[17] However, a May 2016 scientific report estimates that 1 trillion species are currently on Earth, with only one-thousandth of one percent described.[18] The total number of DNA base pairs on Earth is estimated at 5.0 x 1037 with a weight of 50 billion tonnes.[19] In comparison, the total mass of the biosphere has been estimated to be as much as 4 trillion tons of carbon.[20] In July 2016, scientists reported identifying a set of 355 genes from the Last Universal Common Ancestor (LUCA) of all organisms living on Earth.[21]

According to one researcher, "You can find microbes everywhere — [they are] extremely adaptable to conditions, and survive wherever they are."[30]

Fossil evidence informs most studies of the origin of life. The age of the Earth is about 4.54 billion years;[36][37][38] the earliest undisputed evidence of life on Earth dates from at least 3.5 billion years ago.[39][40][41] There is evidence that life began much earlier.

In 2017, fossilised microorganisms, or microfossils, were announced to have been discovered in hydrothermal vent precipitates in the Nuvvuagittuq Belt of Quebec, Canada that may be as old as 4.28 billion years old, the oldest record of life on Earth, suggesting "an almost instantaneous emergence of life" (in a geological time-scale sense), after ocean formation 4.41 billion years ago, and not long after the formation of the Earth 4.54 billion years ago.[1][2][5][6] Nonetheless, life may have started even earlier, at nearly 4.5 billion years ago, as claimed by some researchers.[3][4]

Studies suggest that life on Earth may have come from biological matter carried by space dust[42] or meteorites.[43]

"Remains of life" have been found in 4.1 billion-year-old rocks in Western Australia.[44]

Evidence of biogenic graphite,[45] and possibly stromatolites,[46] were discovered in 3.7 billion-year-old metasedimentary rocks in southwestern Greenland.

In May 2017, evidence of life on land may have been found in 3.48 billion-year-old geyserite which is often found around hot springs and geysers, and other related mineral deposits, uncovered in the Pilbara Craton of Western Australia.[47][48] This complements the November 2013 publication that microbial mat fossils had been found in 3.48 billion-year-old sandstone in Western Australia.[49][50][51]

In November 2017, a study by the University of Edinburgh suggested that life on Earth may have originated from biological particles carried by streams of space dust.[42][52]

In January 2018, a study found that 4.5 billion-year-old meteorites found on Earth contained liquid water along with prebiotic complex organic substances that may be ingredients for life.[43][53]

According to biologist Stephen Blair Hedges, "If life arose relatively quickly on Earth … then it could be common in the universe."[44][54]

Retrieved from "https://encyclopediaofastrobiology.org/w/index.php?title=Earliest_known_life_forms&oldid=3169"
Categories:
Hidden categories:
Cookies help us deliver our services. By using our services, you agree to our use of cookies.