Oceanus is a NASA/JPL orbiter mission concept proposed in 2017 for the New Frontiers mission #4, but it was not selected for development. If selected at some future opportunity, Oceanus would travel to Saturn's moon Titan to assess its habitability.[1][dead link] Studying Titan would help understand the early Earth and exoplanets which orbit other stars. The mission is named after Oceanus, the Greek god of oceans.

Titan is a world of two oceans. One ocean is on the surface and consists of mainly liquid methane (CH
4) and ethane (C
2H
6). The second ocean is under the surface and is made up of brine. Titan is a moon of Saturn but it is a very large body comparable to many planets. Titan is about the size of Mercury and about 40% the size of Earth. Ancient Earth may have had a methane-rich atmosphere with a reducing chemistry like Titan does today. By observing Titan's organic processes at work, Oceanus could help understand the role of organic haze in the early Earth.[2] Oceanus would explore Titan and help understand habitability across the Universe.

Methane clouds on the surface of Titan

Abiotic organic synthesis occurs high in Titan's atmosphere, and a vast water ocean lies far beneath the icy crust, setting up possible chemistry and environment for abiogenesis and potential habitable niches for microorganisms. Oceanus would conduct its science investigations with a multistage mass spectrometer, an infrared camera that sees through the atmosphere,[1] and a radar altimeter with great vertical resolution. 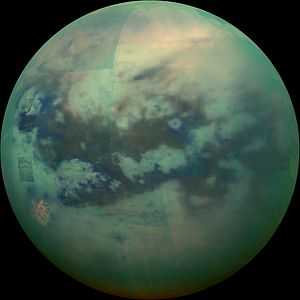 Titan has the basic ingredients for habitability: water, energy, and chemical blocks. On a 4-year global exploration, Oceanus would characterize Titan's habitability globally, the photochemical synthesis of organics in the upper atmosphere, and determine places where they could potentially mix with liquid water.

The mission would be managed by NASA/JPL. JPL would also build parts of the radar and camera, and provide a mass spectrometer. The spacecraft would be developed by Lockheed Martin and derived from their proven central core cylinder designs. This configuration has been successfully applied on Mars Reconnaissance Orbiter, Juno, MAVEN, and OSIRIS-REx. The spacecraft would use Ultraflex solar arrays made by Orbital ATK. The Italian Space Agency (ASI) and its contractor Thales would supply the digital portion of the radar altimeter and parts of the telecommunications system.

On 20 November 2017 NASA selected two other proposals for additional concept studies: Comet Astrobiology Exploration Sample Return (CAESAR), and Dragonfly).[6] Had Oceanus been selected, it would have launched in 2024.[7][8][9]

There are three science instruments on Oceanus plus radio science measurements.

Retrieved from "https://encyclopediaofastrobiology.org/w/index.php?title=Oceanus_(Titan_orbiter)&oldid=1793"
Categories:
Hidden categories:
Cookies help us deliver our services. By using our services, you agree to our use of cookies.