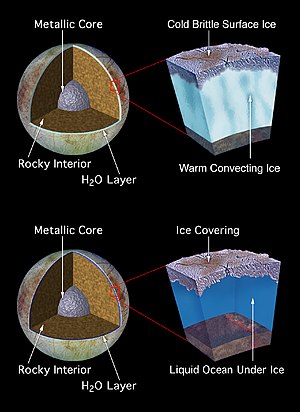 The Ocean Worlds Exploration Program (OWEP) is an initiative to create a NASA mission program meant to explore the places in the outer Solar System that could possess subsurface oceans, to assess their habitability and to seek simple extraterrestrial life.

Prime targets include moons that harbor hidden oceans inside a shell of ice: Europa, Enceladus, and Titan. A host of other bodies in the outer Solar System are inferred by a single type of observation or by theoretical modeling to have subsurface oceans. Europa is the first planned target of this program, and will be visited by the planned Europa Clipper orbiter mission.[1][2]

The US House Appropriations Committee approved the bill in May 20, 2015 and directed NASA to create an Ocean Worlds Exploration Program.[3] There is not yet a formal Ocean Worlds Program that NASA has assigned to a particular center, a "Roadmaps to Ocean Worlds" is in the process,[1][4] and the formal program is still being established within the agency.[3] 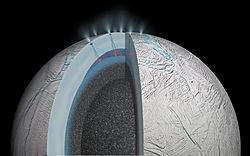 The chief author of NASA's budget proposal is John Culberson, the head of the science subcommittee in the House of Representatives. In Spring 2015 he presented a budget request, creating the possibility of an all-new NASA mission program.[6][7] The House Appropriations Committee approved its version of the FY2016 House Appropriations Commerce-Justice-Science (CJS) bill on May 20, 2015.[2] Therefore, the Committee directed NASA to create an Ocean Worlds Exploration Program whose primary goal is to discover extant life on another world using a mix of Discovery, New Frontiers and Flagship class missions consistent with the recommendations of current and future Planetary Science Decadal Surveys.[1]

In the FY2017 Budget Request, the committee recommended $348 million for "Outer Planets" and "Ocean Worlds," of which not less than $260 million is for the Europa orbiter and lander, with launch of the Europa Clipper orbiter in 2022 and the Europa Lander in 2024.[8]

A 2017 technical analysis stated that the technical challenges are enormous, and that "Without a genuinely strategic program plan, the great promise of an OWEP [Ocean Worlds Exploration Program] is highly likely to remain unfulfilled." [9] The report noted that development of OWEP-enabling technologies must currently compete for priority with other Solar System objectives, which is not useful for strategic planning. The report recommends common, multi-mission technical infrastructure and secure funding to develop it.[9]

Artist's cut-away representation of the internal structure of Ganymede. Layers drawn to scale.

On Earth, itself an ocean world, liquid water is essential to life as we know it. A question is whether the dark, alien oceans of the outer Solar System could be habitable for simple life forms, and if so, what would their biochemistry be.[10] Exploring these moons could help to answer the question of how life arose on Earth and whether it exists anywhere else in the Solar System.[11] It may also be possible to find pre-biotic chemistry occurring, which could provide clues to how life started on Earth.[12] Any life detected at the remote ocean worlds in the outer Solar System would likely have formed and evolved along an independent path from life on Earth, giving us a deeper understanding of the potential for life in the universe.[4]

The three best-documented water oceans beyond Earth are those within Europa, Enceladus and Titan. Of these, Europa's is closest to the surface —less than 10 km— and hence potentially best suited for eventual direct exploration. Enceladus' ocean is deeper —5 to 40 km below its surface— but fractures beneath the south pole of this moon allow ice and gas from the ocean to escape to space where it has been sampled by mass spectrometers aboard the Cassini Saturn orbiter. Titan's ocean is the deepest, at 50 to 100 km, and no evidence for plumes or ice volcanism exist on the surface. A host of other bodies in the outer Solar System are inferred by a single type of observation or by theoretical modeling to have subsurface oceans and these include: Ganymede, Dione, Pluto, Triton, and Ceres,[1][11][12][6][7] as well as Callisto, and Mimas.[13][14]

Retrieved from "https://encyclopediaofastrobiology.org/w/index.php?title=Ocean_Worlds_Exploration_Program&oldid=3125"
Categories:
Cookies help us deliver our services. By using our services, you agree to our use of cookies.