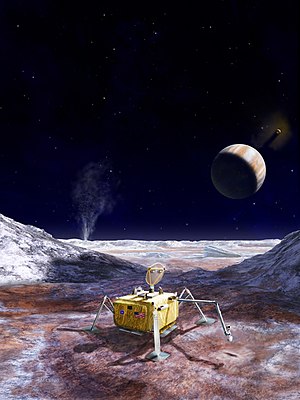 Vision for the lander on Europa with Jupiter in the background 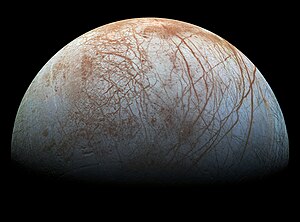 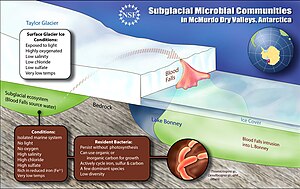 On Earth, subglacial microbial communities at Blood Falls survive in cold darkness without oxygen, living in brine water below Taylor Glacier, but come out at this location in Antarctica. The red color comes from dissolved iron.

Europa Lander is a proposed astrobiology mission concept by NASA to Europa, a moon of Jupiter.[1][2] If selected and developed, it would be launched separately in 2024[2] to complement the studies by the Europa Clipper orbiter mission.

The objectives of the mission would be searching for biosignatures at the subsurface, to characterize the composition of non-ice near-subsurface material, and determine the proximity of liquid water and recently erupted material near the lander's location.

The United States Congress issued a congressional directive about a Europa Lander, and NASA initiated a study in 2016, assessing and evaluating the concept.[1] NASA's Planetary Science Division delivered its report in early February 2017.[1] This was a six-month long study to produce the concept.[3] It was produced by what is called a Science Definition Team or SDT.[4] The study assesses the science value and engineering design of a potential Europa lander mission.[4]

The primary mission goal is detection of organic indicators of past or present life.[5] This would be the first time in forty years that a NASA mission would have a present life-detection strategy evaluated as a main goal.[1][6] The last time was the Viking program in the 1970s.[1] (see Viking lander biological experiments) The lander was described as a logical follow-up to the Galileo orbiter and probe mission in the 1990s, for which a major result was the discovery of conditions on Europa that may support life— in particular a large sub-surface ocean.[3] Earth life can be found in essentially all locations where water is present. It follows that Europa is an excellent candidate in the search for life elsewhere in the Solar System.[7] This subsurface water may not only be warmed by geological activity, but likely also enriched with dissolved minerals and organic compounds.[8] Various ecosystems exist on Earth without any access to sunlight relying instead on hydrothermal vents or other sources of chemicals suitable to energy production by extremophiles.[9] (see chemosynthesis) Measurements to date indicate that Europa has an ocean approximately twice the volume of Earth's oceans. This water layer below the ice may be in contact with the moon's interior allowing ready access to hydrothermal energy and chemistry.[1] Europa surface missions can take advantage of the relatively young, active surface of Europa as this activity may allow deep subsurface materials to regularly escape to the surface.[10]

NASA had previously evaluated a Europa Lander concept in 2005 with the Europa Lander Mission concept.[11] Also, a lander was evaluated in 2012.[12] There was continued support for Europa missions, including in 2014, when the U.S. Congress House Appropriations Committee announced a bipartisan bill that included $80 million USD in funding to continue the Europa mission concept studies.[13][14]

In 18 July 2017, the House Space Subcommittee held hearings on the Europa Clipper as a scheduled Large Strategic Science Mission, and to discuss this lander as a possible follow up.[15] The President's 2018 and 2019 federal budget proposals do not fund the Europa Lander,[16] but it did assign some funds for concept studies.[17][18]

The lander mission would have three main science goals:[1][5]

The launcher would be the Space Launch System (SLS), with a suggested launch in 2024.[2] The SLS is needed given the spacecraft's mass of 16.6 metric tons, including the solid propellant to place the spacecraft into orbit around Jupiter, and the sky crane landing system.[19] One calculated trajectory would see a launch aboard SLS in 2025, Earth gravity assist in 2027, and Jupiter/Europa arrival in 2030.[4] It would spend some time orbiting around Jupiter over the next year to maneuver for its landing on Europa.[4]

View of the Europa's surface from 560 km (335 miles) altitude, as seen during the closest Galileo flyby

At Europa it would have to land on the surface, matching its velocity, but with essentially no atmosphere there is no "entry", it is just a descent and landing.[20] The Planetary Society noted that NASA called this DDL— de-orbit, descent, and landing.[20] Discovered in 1995 by the Hubble Space Telescope, Europa has a very tenuous atmosphere of oxygen,[21] compared to Earth, it is extremely tenuous, the pressure at the surface is predicted to be 0.1 μPa, or 10−12 times that of the Earth.[22]

Major stages of the Europa Lander mission are:[20]

The Europa Clipper, if it was still operating, could function as an additional relay communication spacecraft for the lander.[20] To ensure communication, there is the suggestion to include a telecomm orbiter with the lander mission.[23]

Once landed, the lander would likely operate for about 20 days by using chemical battery power, rather than a radioisotope thermoelectric generator (RTG) or solar power.[4][18] One problem with nuclear power is availability: as of 2018 NASA has only enough Pu-238 to power four RTGs.[24] While the Department of Energy began manufacturing Pu-238 again in 2013, NASA is saving its limited supply for other applications such as Voyager-like spacecraft or Mars rovers.[24] The RTGs are famous for powering spacecraft for decades; for example, the Voyager program probes that were designed and launched in 1977 are still operational.[24] On the other hand, solar panels would have to receive enough sunlight and endure the radiation environment. One issue is that solar panels can be significantly degraded by radiation.[25] Previously, NASA had evaluated a nuclear powered add-on Lander to the cancelled Jupiter Icy Moons Orbiter mission, which might have used a small radioisotope power system (RPS) for power.[26]

Regardless of the power source, one of the limiting factors for the lifetime of the mission may be surviving radiation; the surface of Europa is predicted to experience 540 rem per day, whereas a typical Earth surface dose is about 0.14 rem/day.[27] Radiation damaged the electronics of the Galileo orbiter during its mission.[28] In 2012 a nuclear powered Europa Lander was evaluated, which would have used two ASRGs.[12]

The concept would require funding and further development to be launched, and one of the requirements is to operate in the radiation environment at the moon's surface.[3] The radiation environment at Europa is extreme, so the lander may need additional protection as the Juno Radiation Vault in the Juno Jupiter orbiter.[29] The vault helped reduce radiation exposure to vulnerable systems, especially electronics on the orbiter.

NASA announced in May 2017 to the scientific community to prepare for a planned competition to select the science instruments.[30] The concept study reports will be due June 2019.[31] The objectives of the mission require a notional science instrument payload that may include:[4][32][5]

Planetary protection guidelines require that inadvertent contamination of a Europa ocean by terrestrial organisms must be avoided, to a probability level of less than 1 in 10,000.[33][5] The lander (and sky crane) must be assembled and tested in a clean room where all parts would have to be cleaned or sterilized before they are installed in the spacecraft. After delivering the lander, the sky crane is recommended to fly away into Jupiter for disposal.[34] At the end of the mission, the lander might self-destruct using an incendiary device.[5] That system can also be triggered if the spacecraft loses contact with the Earth.[19]

The Europa Clipper is a separately launched spacecraft that would lay a foundation for the Europa Lander mission.[1] Previously, NASA had evaluated a lander for that mission as well, but the strong congressional support led to a full separate mission proposal for the lander by 2016.[35] The orbiter/flyby mission is important for a Europa lander in that it will help determine a landing location, characterize the radiation environment, and prepare the way for it.[36] Also in February 2017 the Europa Clipper mission moved from Phase A to Phase B, which includes the selection of instruments.[37] On March 9, 2017, NASA officially named the mission the Europa Clipper.[38]

Retrieved from "https://encyclopediaofastrobiology.org/w/index.php?title=Europa_Lander_(NASA)&oldid=1724"
Categories:
Cookies help us deliver our services. By using our services, you agree to our use of cookies.