Laplace-P (formerly called Europa Lander[1]) is a proposed orbiter and lander by the Russian Federal Space Agency designed to study the Jovian moon system and explore Ganymede with a lander.

Russia has expressed an interest in flying their lander with the Jupiter Icy Moon Explorer (JUICE) in 2022, but as yet the current Laplace-P concept is for a separate orbiter and lander to be launched by two separate rockets in 2023, if the mission is launched.[1][3]

The Europa Lander would have been launched in 2020s as part of the Europa Jupiter System Mission proposed in 2007 by the ESA, that would have studied the Jovian moon system as well as the planet Jupiter. The orbiter would have done several flybys of other Jovian moons before being placed in orbit around Europa.[4] The lander would have researched the ocean underneath the ice sheet of Europa.[5] However, to avoid the damaging effects of Jupiter's radiation belts, the destination of the lander was switched in 2011 from Europa to Ganymede.[1] Ganymede is the largest moon in the Solar System and has an internal ocean that may contain more water than all of Earth's oceans together.[6][7][8] 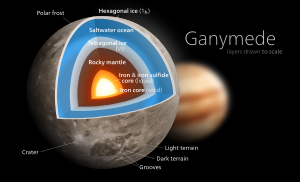 Artist's cut-away representation of the internal structure of Ganymede. Layers drawn to scale.

Laplace-P would be a dual mission featuring an orbiter and a lander launched by two separate rockets toward Jupiter. One spacecraft would orbit the moon Ganymede, while the lander would perform a soft landing on its surface.[1][11] The "P" in Laplace-P stands for "posadka" (landing).

The planned trajectory is to use the VEEGA (Venus-Earth-Earth Gravity Assist) route.[12] Both spacecraft would be carrying about 50 kg (110 lb) of scientific instruments each.[1] The lander would be powered by an RTG, while the orbiter would be equipped either with an RTG or with solar panels.[1] If the lander flies with JUICE, then the Russian orbiter would be omitted due to JUICE filling its role.

The radiation conditions on the Ganymede surface are fairly benign. On the other hand, the Ganymedean gravitational parameter (GM = 9887.8 km3/s2) makes the landing on it from the orbit more difficult than in the case of Europa.[12]

Retrieved from "https://encyclopediaofastrobiology.org/w/index.php?title=Laplace-P&oldid=1756"
Categories:
Hidden categories:
Cookies help us deliver our services. By using our services, you agree to our use of cookies.