The Viking 2 mission was part of the American Viking program to Mars, and consisted of an orbiter and a lander essentially identical to that of the Viking 1 mission.[1] The Viking 2 lander operated on the surface for 1316 days, or 1281 sols, and was turned off on April 11, 1980 when its batteries failed. The orbiter worked until July 25, 1978,[1] returning almost 16,000 images in 706 orbits around Mars.[3]

The craft was launched on September 9, 1975. Following launch using a Titan/Centaur launch vehicle and a 333-day cruise to Mars, the Viking 2 Orbiter began returning global images of Mars prior to orbit insertion. The orbiter was inserted into a 1500 x 33,000 km, 24.6 h Mars orbit on August 7, 1976 and trimmed to a 27.3 h site certification orbit with a periapsis of 1499 km and an inclination of 55.2 degrees on 9 August. Imaging of candidate sites was begun and the landing site was selected based on these pictures and the images returned by the Viking 1 Orbiter.

The lander separated from the orbiter on September 3, 1976 at 22:37:50 UT and landed at Utopia Planitia. Normal operations called for the structure connecting the orbiter and lander (the bioshield) to be ejected after separation, but because of problems with the separation the bioshield was left attached to the orbiter. The orbit inclination was raised to 75 degrees on 30 September 1976.

Operations included close approaches to Deimos in October 1977 and the periapsis was lowered to 300 km and the period changed to 24 hours on 23 October 1977. The orbiter developed a leak in its propulsion system that vented its attitude control gas. It was placed in a 302 × 33,176 km orbit and turned off on 25 July 1978 after returning almost 16,000 images in about 700–706 orbits around Mars. 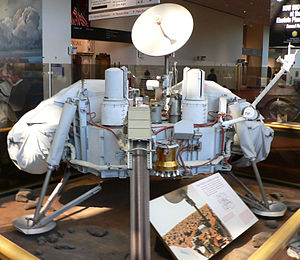 The lander and its aeroshell separated from the orbiter on 3 September 19:39:59 UT. At the time of separation, the lander was orbiting at about 4 km/s. After separation, rockets fired to begin lander deorbit. After a few hours, at about 300 km attitude, the lander was reoriented for entry. The aeroshell with its ablative heat shield slowed the craft as it plunged through the atmosphere.

Approximately 22 kg (49 lb) of propellants were left at landing. Due to radar misidentification of a rock or highly reflective surface, the thrusters fired an extra time 0.4 second before landing, cracking the surface and raising dust. The lander settled down with one leg on a rock, tilted at 8.2 degrees. The cameras began taking images immediately after landing.

The Viking 2 lander was powered by radioisotope generators and operated on the surface until April 11, 1980, when its batteries failed.

The soil resembled those produced from the weathering of basaltic lavas. The tested soil contained abundant silicon and iron, along with significant amounts of magnesium, aluminum, sulfur, calcium, and titanium. Trace elements, strontium and yttrium, were detected.

The amount of potassium was one fifth of the average for the Earth's crust. Some chemicals in the soil contained sulfur and chlorine that were like those remaining after the evaporation of sea water. Sulfur was more concentrated in the crust on top of the soil than in the bulk soil beneath.

The Sulfur may be present as sulfates of sodium, magnesium, calcium, or iron. A sulfide of iron is also possible.[4] The Spirit rover and the Opportunity rover both found sulfates on Mars.[5]

The Opportunity rover (landed in 2004 with advanced instruments) found magnesium sulfate and calcium sulfate at Meridiani Planum.[6] Using results from the chemical measurements, mineral models suggest that the soil could be a mixture of about 80% iron-rich clay, about 10% magnesium sulfate (kieserite?), about 5% carbonate (calcite), and about 5% iron oxides (hematite, magnetite, goethite?).

These minerals are typical weathering products of mafic igneous rocks.[7] All samples heated in the gas chromatograph-mass spectrometer (GCMS) gave off water.

However, the way the samples were handled prohibited an exact measurement of the amount of water. But, it was around 1%.[8] Studies with magnets aboard the landers indicated that the soil is between 3 and 7 percent magnetic materials by weight. The magnetic chemicals could be magnetite and maghemite, which could come from the weathering of basalt rock.[9][10] Subsequent experiments carried out by the Mars Spirit rover (landed in 2004) suggest that magnetite could explain the magnetic nature of the dust and soil on Mars.[11]

Most scientists now believe that the data were due to inorganic chemical reactions of the soil; however, this view may be changing after the recent discovery of near-surface ice near the Viking landing zone.[citation needed] Some scientists still believe the results were due to living reactions. No organic chemicals were found in the soil.[citation needed]

The Viking Orbiters caused a revolution in our ideas about water on Mars. Huge river valleys were found in many areas. They showed that floods of water carved deep valleys, eroded grooves into bedrock, and traveled thousands of kilometers. Areas of branched streams, in the southern hemisphere, suggested that rain once fell.[18][19][20]

The images below, some of the best from the Viking Orbiters, are mosaics of many small, high resolution images. Click on the images for more detail. Some of the pictures are labeled with place names. 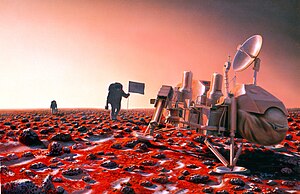 Viking 2 (1976) →
Retrieved from "https://encyclopediaofastrobiology.org/w/index.php?title=Viking_2&oldid=2890"
Categories:
Hidden categories:
Cookies help us deliver our services. By using our services, you agree to our use of cookies.