Deep Space 2 was a NASA probe part of the New Millennium Program. It included two highly advanced miniature space probes that were sent to Mars aboard the Mars Polar Lander in January 1999.[1] The probes were named "Scott" and "Amundsen", in honor of Robert Falcon Scott and Roald Amundsen, the first explorers to reach the Earth's South Pole. Intended to be the first spacecraft to penetrate below the surface of another planet, after entering the Mars atmosphere DS2 was to detach from the Mars Polar Lander mother ship and plummet to the surface using only an aeroshell impactor, with no parachute. The mission was declared a failure on March 13, 2000, after all attempts to reestablish communications following the descent went unanswered.[2]

Deep Space 2, also known as "Mars Microprobe,"[2] was the second spacecraft developed under the NASA New Millennium Program to flight-test advanced technologies concepts for space missions. The mission was intended to do an engineering validation of the concept of a penetrator probe, impacting the planet at high velocity, instead slowing down for a soft landing as done by the probes conventionally used for planetary exploration. The penetrator concept is potentially a lower-cost approach, and has a proposed advantage of giving access to the subsurface of the planet being studied (in this case, Mars.)

Each probe[3][4] weighed 2.4 kg (5.3 lb) and was encased in a protective aeroshell. They rode to Mars aboard another spacecraft, the Mars Polar Lander.

Upon arrival near the south polar region of Mars on December 3, 1999,[1] the basketball-sized shells were released from the main spacecraft, plummeting through the atmosphere and hitting the planet's surface at over 179 m/s (590 ft/s). On impact, each shell was designed to shatter, and its grapefruit-sized probe was to punch through the soil and separate into two parts. The lower part, called the forebody, was designed to penetrate as far as 0.6 meters (2 ft 0 in) into the soil. The upper part of the probe, or aftbody, was designed to remain on the surface in order to radio data to the Mars Global Surveyor spacecraft in orbit around Mars. The Mars Global Surveyor would act as a relay in order to send the data collected back to Earth. The two sections of the probe were designed to remain connected via a data cable.[2]

The probes reached Mars apparently without incident, but communication was never established after impact. It is not known what the cause of failure was. The crash review board[5] suggests several possible causes for failure: 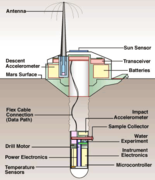 Retrieved from "https://encyclopediaofastrobiology.org/w/index.php?title=Deep_Space_2&oldid=8927"
Categories:
Hidden categories:
Cookies help us deliver our services. By using our services, you agree to our use of cookies.