The Murchison meteorite is a large meteorite that fell to earth near Murchison, Victoria, in Australia, in 1969. It is one of the most studied meteorites due to its mass (>100 kg), the fact that it was an observed fall, and that it belongs to a group of meteorites rich in organic compounds.

On 28 September 1969 at about 10:58 local time, near the town of Murchison, Victoria, in Australia, a bright fireball was observed to separate into three fragments before disappearing,[1] leaving a cloud of smoke. About 30 seconds later, a tremor was heard. Many fragments were found over an area larger than 13 square kilometres (5.0 sq mi), with individual mass up to 7 kilograms (15 lb); one, weighing 680 grams (1.5 lb), broke through a roof and fell in hay.[1] The total collected mass exceeds 100 kilograms (220 lb).

The meteorite belongs to the CM group of carbonaceous chondrites (see meteorite classification). Like most CM chondrites, Murchison is petrologic type 2, which means that it experienced extensive alteration by water-rich fluids on its parent body[2] before falling to Earth. CM chondrites, together with the CI group, are rich in carbon and are among the most chemically primitive meteorites.[3] Like other CM chondrites, Murchison contains abundant CAIs. Over 15 amino acids, some of the basic components of life, have been identified in the meteorite[4] by multiple studies. All the amino acids found in the Murchison meteorite have been synthesized in laboratory experiments by the action of electric discharge on a mixture of methane, nitrogen, and water with traces of ammonia.[4] 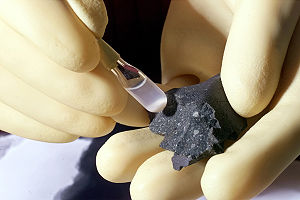 Fragment of the Murchison meteorite (at right) and isolated individual particles (shown in the test tube).

Murchison contains common amino acids such as glycine, alanine and glutamic acid as well as unusual ones like isovaline and pseudoleucine.[5] A complex mixture of alkanes was isolated as well, similar to that found in the Miller–Urey experiment. Serine and threonine, usually considered to be earthly contaminants, were conspicuously absent in the samples. A specific family of amino acids called diamino acids was identified in the Murchison meteorite as well.[6]

The initial report stated that the amino acids were racemic and therefore formed in an abiotic manner because amino acids of terrestrial proteins are all of the L-configuration. Later the amino acid alanine, which is also a protein amino acid, was found to have an excess of the L-configuration,[7] which led several to suspect terrestrial contamination according to the argument that it would be "unusual for an abiotic stereoselective decomposition or synthesis of amino acids to occur with protein amino acids but not with non-protein amino acids."[8] In 1997, L-excesses were also found in a non-protein amino acid, isovaline,[9] suggesting an extraterrestrial source for molecular asymmetry in the Solar System. At the same time, L-excesses of alanine were again found in Murchison but now with enrichment in the isotope 15N,[10] however, the isotopic pairing was later contested on analytical grounds.[11] The list of organic materials identified in the meteorite was extended to polyols by 2001.[12]

Several lines of evidence indicate that the interior portions of well-preserved fragments from Murchison are pristine. A 2010 study using high resolution analytical tools including spectroscopy, identified 14,000 molecular compounds including 70 amino acids in a sample of the meteorite.[15][16] The limited scope of the analysis by mass spectrometry provides for a potential 50,000 or more unique molecular compositions, with the team estimating the possibility of millions of distinct organic compounds in the meteorite.[17]

Measured purine and pyrimidine compounds were found in the Murchison meteorite. Carbon isotope ratios for uracil and xanthine of δ13C = +44.5‰ and +37.7‰, respectively, indicate a non-terrestrial origin for these compounds. This specimen demonstrates that many organic compounds could have been delivered by early Solar System bodies and may have played a key role in life's origin.[18]

This article incorporates public domain material from websites or documents of the National Aeronautics and Space Administration.

Retrieved from "https://encyclopediaofastrobiology.org/w/index.php?title=Murchison_meteorite&oldid=3143"
Categories:
Hidden categories:
Cookies help us deliver our services. By using our services, you agree to our use of cookies.