User:Robertinventor/Discussion of science value of a Mars sample return

The motivation for the mission is its value for science. So evaluating its science potential is an important part of the decision process about whether to carry out the mission or not.

The European Space Foundation report cites many advantages of a Mars sample return.[6]

"Through the study of a sample, researchers could make great progress in understanding the history of Mars, its volatiles and climate, its geological and geophysical history, and gain new insights into astrobiology. A Mars sample return has also been deemed an essential precursor to any human exploration missions to Mars

"Although some questions may be answered through in situ studies carried out by robotics on the Mars surface, returning a sample to Earth is desirable for several reasons:

In addition to the above points, returning a Mars sample will bring enormous public excitement and engagement to space-related activities, along with pride and prestige to this accomplishment of mankind.

This is a white paper submitted for the decadal review by eight authors from the NASA Jet Propulsion Laboratory, the Scripps Institution of Oceanography, SETI Institute, NASA Ames Research Center and the University of California Berkeley.

These authors argue that we do not yet know enough to intelligently select samples for return. They recommend a "Follow the Nitrogen strategy for in situ exploration".

They recommend that a MSR should be delayed until unambiguous biomarkers are identified in prospective Mars samples. They argue that there is a risk that samples returned at our current level of understanding may in the worst case be "as ambiguous with respect to the search for life as ALH84001." [1] [7]

For return of biologically interesting samples, they require ability to identify, in situ:

Paige raises similar concerns.[2] He refers to a 1996 study requested by Michael Meyer of NASA’s Exobiological Program Office.[8] This divided Mars exploration into five phases including:[2]

Paige reasons that Mars exploration is still in phases 1 and 2, and that we need to complete phase 3 before going on to phase 4.[2][9]

Some of the decadal review white paper, and Paige's concerns (but not all) have been addressed by the Final report of the MSR End-to End International Science Analysis Group in 2011. They stress the importance of observations to understand the geological context, They also plan to include the ESA Pasteur payload (developed for ExoMars) which includes some life detection instruments. It will for instance able for instance to detect many specific molecules likely to be associated with past or present life, with its Life Marker Chip.[10][11][12]

The focus of this report was on missions they considered practical, so, unlike Jeffrey Bada's suggestion, they don't require deep drilling, and don't require the MSR to be delayed until unambiguous biosignatures are found.

"Finally, for the purposes of this study, the vision of the MSR Campaign was constrained by what was considered to be practical ... Thus, objectives that might require high latitudes, high elevations, deep (>2 m) drilling, and large sample masses, for example, were given lower priority. The intent was not to provide a prioritized list in the abstract, but one that could be used to guide a sample return campaign in the context of our current knowledge and expectations of future engineering and fiscal resources." [11]

Craig Venter (famous for sequencing the human genome) is in process of developing a miniaturized gene sequencer small enough to fit on a rover to Mars. Craig Venter's view is that this is best done in situ on Mars.[3]

His motivation for this is that current gene sequencers are now so sensitive, that if a single micro-organism from Earth landed on the sample returned from Mars, it would ruin any experiments to test for presence of martian DNA on the sample.

It is possible that traces of life on Mars may be very rare and heterogeneously distributed, and the concentration of organics in the soil may be very low. Thus, it is essential to avoid biological contamination as well as organic contamination of Mars and of the collected samples.

Alternatives to a Mars sample return to Earth[edit source | hide]

Other approaches are suggested by Zubrin and Levin (of the ICAMSR) but will be left for the separate article devoted to their views. 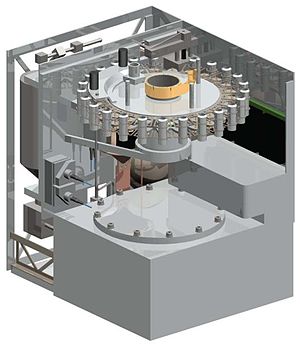 We have seen that several authors recommended in situ survey first and and Paige predicted that new instruments under development will make it possible to analyse rocks in situ on Mars, permitting a flexible approach where rovers can make new choices of targets of potential biological interest on the surface of Mars based on findings for the samples encountered earlier in the mission.[1][2]

This is list of a few of the instruments under development for future Mars missions that permit or will permit preliminary study of samples with greater sensitivity than any instruments currently in use on the rovers.

Dirk Schulze-Makuch has taken this view, that a vigorous continuing study of the Mars surface would be more beneficial than a MSR at the current stage of exploration of Mars, though for rather different reasons.

Dirk Schulze-Makuch's view that from an atrobiological standpoint, in-situ research is better and cheaper than MSR[edit source | hide]

This view was given in an interview for space.com of astrobiologist Dirk Schulze-Makuch [19]

"I disagree with the high priority on sample return," said astrobiologist Dirk Schulze-Makuch of Washington State University in Pullman.

"Our in-situ [on-the-spot] capabilities are so much better nowadays than, let's say during Viking lander (1970s) times," Schulze-Makuch said. "We could address with an in-situ mission whether microbial life is present on Mars."

Sample return missions are so much more costly, Schulze-Makuch said, "and the only thing that would be advantageous, in my view, is to get an absolute age scale via radioactive dating of Martian rocks," Schulze-Makuch said, "but from an astrobiological viewpoint, [an] in-situ mission would be better and cheaper."

Study via telepresence from Mars orbit, followed by return of the sample to Mars orbit[edit source | hide] 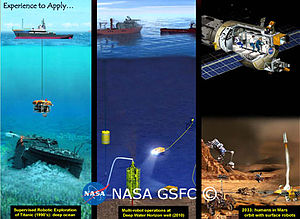 Telerobotics exploration on Mars and Earth

During the “Exploration Telerobotics Symposium" in 2012 experts on telerobotics from industry, NASA and academics met to discuss telerobotics, and its applications to space exploration. Amongst other issues, particular attention was given to Mars missions and a Mars sample return.

They came to the conclusion that telerobotic approaches could permit direct study of the samples on the Mars surface via telepresence from Mars orbit, permitting rapid exploration and use of human cognition to take advantage of chance discoveries and feedback from the results obtained so far.[23]

They found that telepresence exploration of Mars has many advantages. The astronauts have near real-time control of the robots, and can respond immediately to discoveries. It also prevents contamination both ways and has mobility benefits as well.[24]

Return of the sample to orbit has the advantage that it permits analysis of the sample without delay, to detect volatiles that may be lost during a voyage home. This was the conclusion of a meeting of researchers at the NASA Goddard Space Flight Center in 2012. [25] 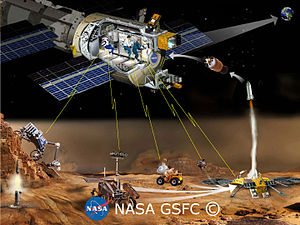 "One possible scenario for surface exploration of Mars via LLT could be the deployment of twin telerobotic rovers on the surface with high-definition visual tools to allow low-latency communication and rapidly adaptable operation from an on-orbit crew for field astrobiology. Such “tele-rovers” could be equipped with instruments for detailed in situ reconnaissance and capabilities for recovering and sending selected samples to the human-tended on-orbit spacecraft for preliminary screening by means of lab analysis by resident astronauts. In the case of samples of biological significance, very rapid encapsulation and recovery of the sample materials at the spacecraft in orbit are required and this is enabled by this approach. Most of the required technology already exists for terrestrial telerobotics exploration of Earth, although the TRL would have to be advanced and validated for operations on Mars"[23]

Some researchers and mission planners have put forward strong advocacy for an early Mars sample return. In particular this was one of the main conclusions of the 2011 decadal survey, an extensive survey of the community of active planetary scientists carried out every ten years in the USA.

The 2011 survey strongly advocated a Mars Sample Return program as the top flagship mission, to be carried out in several stages (with the mission to Europa proposal second).

"The view expressed by the Mars community is that Mars science has reached the point where the most fundamental advances will come from study of returned samples."[26]

In this survey, it was descoped due to cost considerations but the science value was considered high.[27]

In favour of the value of sample return they cite results from previous sample returns and their analogues (e.g., of meteorites, the Moon, cometary dust, and the solar wind) and point out that the Martian meteorites known are from a limited range of rock types, so that carefully selected samples returned from Mars can greatly increase our understanding of the planet.[28]

These views were later summarizes as:[5]

The Mars community, in their inputs to the decadal survey, was emphatic in their view that a sample return mission is the logical next step in Mars exploration. Mars science has reached a level of sophistication that fundamental advances in addressing the important questions above will only come from analysis of returned samples.

In the summary of the final report of the Mars Program Planning Group in September 2012,[29] two main possibilities were considered:

They comment that the first option (their pathways A1 or A2) is most directly responsive to the NRC Decadal Survey recommendations.