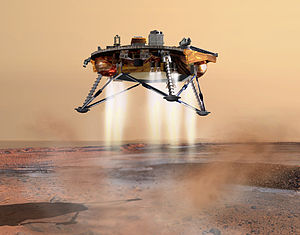 Artist's impression of the Phoenix Lander settling down on Mars.

Its measurements of isotope ratios of carbon and oxygen gave evidence for liquid water on the surface now or in the recent geological past.[1].

Its observations of possible droplets on its legs suggested new ways that water could be stable temporarily on Mars.[2] These observations lead many scientists to reassess the present habitability of Mars

The Phoenix lander spacecraft landed in what is thought to be an ancient ocean bed near the north pole of Mars (Wikipedia). It is the first, and so far the only spacecraft to land successfully in the Martian polar regions. The Mars Polar Lander (Wikipedia) was the only other attempt but it crashed. Until 2008, most scientists thought that there was no possibility of liquid water on Mars for any length of time in the current conditions there. However, Phoenix observed droplet like features on its legs and also made observations of isotope ratios in the Martian atmosphere, both of which suggested presence of liquid brines on Mars right now or in the geologically recent past.

in 2008 through to 2009, droplets were observed on the landing legs of Phoenix.

Unfortunately, it wasn't equipped to analyse them in that location. However, the leading theory is that these were droplets of salty water.[2] They were observed to grow, darken and coalesce[3], and then disappear, presumably as a result of falling off the legs.

In December 2013, Nilton Renno[4] and his team using the Michigan Mars Environmental Chamber were able to simulate the conditions at its landing site and the droplets[5]. They formed salty brines within minutes when salt overlaid ice, with the salt, especially perchlorates, acting as an "antifreeze"[6]. The team concluded that suitable conditions for brine droplets may be widespread in the polar regions[7][8]. Nilton Renno talks about their results in this video

The Phoenix droplets may have formed on mixtures of salt and ice that were thrown up onto its legs when it landed. [7][8]. The Michegan Mars simulation chamber was developed to study the possibility of brines forming in Mars surface conditions:

Introduction: We have developed the Michigan Mars Environmental Chamber (MMEC) to simulate the entire range of Martian surface and shallow subsurface conditions with respect to temperature, pressure, relative humidity, solar radiation and soil wetness. Our goal is to simulate the Martian diurnal cycle for equatorial as well as polar Martian conditions and test the hypothesis that salts known to exist in the Martian regolith can deliquesce and form brine pockets or layers by freeze-thaw cycles. Motivation: Liquid water is one of the necessary ingredients for the development of life as we know it. ... It has been shown that liquid brines are ubiquitous in the Martian polar regions and microbial communities have been seen to survive under similar conditions in Antarctica's Dry Valleys. 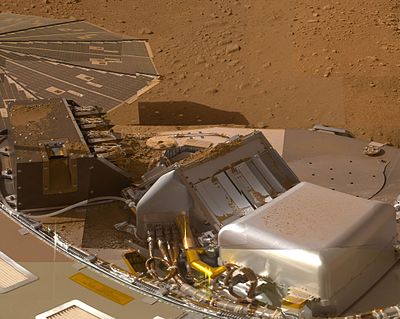 The deck of the Phoenix lander, photographed on Mars. The mass spectrometer used to make the atmosphere isotope measurements is at bottom right. Its observations showed that liquid water on the surface of Mars has exchanged oxygen atoms chemically with the carbon dioxide in the atmosphere in the recent geological past. Though it wasn't able to distinguish between water that is present on the surface intermittently (e.g. after a meteorite impact or volcanic eruption) or continuously (e.g. as deliquescing subsurface brines).

Phoenix also made isotopic measurements of the carbon and oxygen atoms in the atmospheric CO2 in the atmosphere. These measurements show that the oxygen has exchanged chemically with some liquid on the surface, probably water, in the recent geological past.[1][9] This gives indirect but strong evidence that liquid water exists on the surface or has existed, in the very recent geological past.

In detail, first they found that the ratio of isotopes for 13C to 12C in the atmosphere is similar to Earth. Mars should be enriched in 13C because the lighter 12C is lost to space, but isn't. So this shows that the CO2 must be continually replenished. So Mars must be geologically active at least from time to time in the recent geological past.

Then with the oxygen, their findings were the other way around. The CO2 is enriched in 18O compared with the 16O compared with CO2 as emitted from volcanic activity. They can make this deduction using information from meteorites from Mars, one of which was formed as recently as 160 million years ago. This shows that the oxygen in the CO2 in the atmosphere must have reacted chemically with water on the surface in order to take up heavier oxygen-18.

This research wasn't able to determine if this liquid water is episodic (e.g. after a meteorite strike) or continuously present. However their findings suggested that the exchange with the liquid water happened primarily at temperatures near freezing, which may rule out some hypotheses, particularly hydrothermal vent systems, as the primary source for the water.

Retrieved from "https://encyclopediaofastrobiology.org/w/index.php?title=The_Phoenix_lander%27s_2008_Mars_observations_of_droplets_on_its_legs_and_evidence_of_atmospheric_exchange_with_liquid_water&oldid=8863"
Category:
Cookies help us deliver our services. By using our services, you agree to our use of cookies.