Sara Seager (born 21 July 1971) is a Canadian-American astronomer and planetary scientist.[2] She is a professor at the Massachusetts Institute of Technology and is known for her work on extrasolar planets and their atmospheres. She is the author of two textbooks on these topics,[5][6] and has been recognized for her research by Popular Science,[7] Discover Magazine,[8] Nature,[9] and TIME Magazine.[10] Seager was awarded a MacArthur Fellowship in 2013 citing her theoretical work on detecting chemical signatures on exoplanet atmospheres and developing low-cost space observatories to observe planetary transits.[11]

Seager was born in Toronto, Ontario, Canada, and is Jewish.[2][12][13] Her father, Dr. David Seager, who lost his own hair when he was 19 years old, was a pioneer and one of the world's leaders in hair transplantation and the founder of the Seager Hair Transplant Center in Toronto.[14][15]

She earned the degree of Bachelor of Science in Mathematics and Physics from the University of Toronto in 1994, assisted by a NSERC University Undergraduate Student Research Award, and a PhD in astronomy from Harvard University in 1999. Her doctoral thesis developed theoretical models of atmospheres on extrasolar planets and was supervised by Dimitar Sasselov.[3][4][16]

She held a postdoctoral research fellow position at the Institute for Advanced Study between 1999 and 2002 and a senior research staff member at the Carnegie Institution of Washington until 2006. She joined the Massachusetts Institute of Technology in January 2007 as an associate professor in both physics and planetary science, was granted tenure in July 2007,[17] and was elevated to full professor in July 2010.[18] She currently holds the "Class of 1941" chair.[1]

She is married to Charles Darrow and they have two sons from her first marriage. Her first spouse, Michael Wevrick, died of cancer in 2011.[19][20] 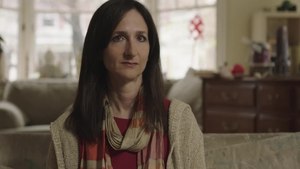 NASA referred to her as "an astronomical Indiana Jones".[21] Sara Seager used the term "gas dwarf" for a high-mass super-Earth-type planet composed mainly of hydrogen and helium in an animation of one model of the exoplanet Gliese 581 c. The term "gas dwarf" has also been used to refer to planets smaller than gas giants, with thick hydrogen and helium atmospheres.[22][23]

Seager was awarded the 2012 Sackler Prize for "analysis of the atmospheres and internal compositions of extra-solar planets",[24] the Helen B. Warner Prize from the American Astronomical Society in 2007 for developing "fundamental techniques for understanding, analyzing, and finding the atmospheres of extrasolar planets.[25] and the 2004 Harvard Bok Prize in Astronomy.[26] She was appointed as a fellow to the American Association for the Advancement of Science in 2012 and elected to the Royal Astronomical Society of Canada as an honorary member in 2013.[1] In September 2013 she became a MacArthur Fellow.[27] She was elected to the American Philosophical Society in 2018.[28]

Seager developed a parallel version of the Drake equation to estimate the number of habitable planets in the galaxy.[29] Instead of aliens with radio technology, Seager has revised the Drake equation to focus on simply the presence of any alien life detectable from Earth. The equation focuses on the search for planets with biosignature gases, gases produced by life that can accumulate in a planet atmosphere to levels that can be detected with remote space telescopes.[29]

where: N = the number of planets with detectable signs of life

N* = the number of stars observed

FQ = the fraction of stars that are quiet

Fo = the fraction of those planets that can be observed

FL = the fraction that have life

FS = the fraction on which life produces a detectable signature gas

Retrieved from "https://encyclopediaofastrobiology.org/w/index.php?title=Sara_Seager&oldid=8029"
Categories:
Hidden categories:
Cookies help us deliver our services. By using our services, you agree to our use of cookies.